So I finally put holes in one of these after resisting the temptation for some time.

The Graffiti Tag uses the angular Agility cover from the much loved Octane and the low diff Halogen core from the popular Tribal line. It claims to fit in as a medium to dry lane ball, but is stronger than most balls in that range that in my experience.

I was looking to get a ball to lay down on the backends and not go completely square off the abundant free hook outside 10 at Belconnen, where I'm subbing for an injured friend for a while.

I laid this ball out at 120° × 3" × 60°. (Yes, this is firmly in "hook and die" layout territory.) Even with this crappiest of layouts, the ball will not quit, which is pretty impressive. I also took the surface down to 2000 Abralon on the Haus machine to tame the change of direction further. 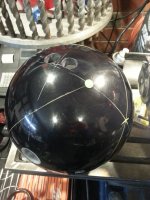 On the fresh house shot at Belconnen, I found the Graffiti Tag to be way too strong and it was back in the bag. Later on though, I pre bowled for this week and took the opportunity to move about 10 boards left with my feet and about 5 with my target. This got me standing about 24, targeting 13-15, swinging out to around 7 and striking a lot.

All of a sudden, this ball looked like money. The shape on the lane was solid, the pin carry was excellent and the amount of area it opened up was ridiculous. I had shots making the pocket from 3 board to about 10 at the breakpoint. (It would have been embarrassing were I in any tournament form!) The continuation through the pin deck was very impressive and it made that distinctive Motiv noise in the pocket. It also didn't split for 3 games, leaving me with 30 clean frames and 721/3. I can assure you that not having bowled a ball for a fortnight, I wasn't throwing it 240-good! This ball got the job done.

So, the Motiv Graffiti Tag is clean through the front and stronger down lane than advertised in my opinion, but most folks are looking for something extra, so maybe look this way. I think the strokers will love it as an angular ball to use later in the day and the crankers will like it as ball to lay out weak to blend out over reaction or lay out strong to have that ball to loft the left cap with. It's also pretty funky looking in black with lime green logos, making it a cinch to read on the lane and through the pins.

Ken McLachlan of KM Bowling Supplies is the Australian Motiv distributor for pro shops to contact and he has this ball in stock at the time of writing.

As you've probably guessed, I'm impressed with it, and yes, of course it was drilled at Bowler's Edge!